1. How to recap all the amazing things we have seen, done and experienced while we’ve been away and

2. How to overcome this sinking feeling that life starts again tomorrow… Reality is about to smack me in the face.

Now I know that most of the time good holidays have to come to an end… And that life isn’t actually that bad… It’s just not the unrealistic holiday life you get used to… So I thought that I might just spend some time reflecting on the trip and updating the list… and maybe, just maybe it will start to squash my super Monday blues

The list was a little loaded this year, in that I put quite a few things on my list that I knew I would cross of in New Zealand… Some planned adventures that also made fun list additions.  When I made the list I had guessed I would complete about 10 things while we were here… But it turns out I managed to squeeze a few more in.  And to be honest, I think this is the best way to work through some of my highlights from a pretty jam packed and incredible time away… Ok so here’s what we crossed off…

1. Visit Hobbiton – completed: 01/01/15
This was a super fun way to start the new year.  I have to admit The Shire is about the only thing that I loved about The Lord of the Rings or The Hobbit movies… I like the idea of homes and villages just for short people, where everything is in reach and there is always food!  So, while you can do lots of tours throughout New Zealand for both movies trilogies, the only one I had any desire to see was this and it was the best! 90 tiny houses with tiny windows, chimneys, jars and clothes… just perfect! Oh and we got have a drink at the green dragon which was pretty cool too.  I think what helped me enjoy this even more was the fact that we saw the final Hobbit movie on Boxing Day… And the day before we had jet boated around the rapids from the barrel scene in the second Hobbit movie… So I was in the Tolkien zone! 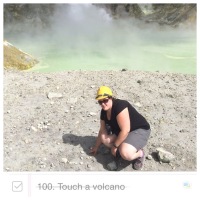 100. Touch a volcano – completed: 02/01/15
So it turns out that we bookended the list in the first two days of the year! That, I didn’t plan… It also turns out that touching a volcano wasn’t that difficult to do in New Zealand, although the one I used for the list was a bit of a turbulent trip. What I had forgotten when I popped this in as number 100 was that New Zealand is pretty much lots of old volcanoes stuck together… In face the whole city of Rotorua is in a dormant volcano… Seriously New Zealand is pretty much a massive death trap!  During a cultural dinner we went to the guide tried to convince us that Rotorua was safe because it had geysers… Places were boiling water and steam spew from the earth… Because these released pressure… I am not convinced that that volcano couldn’t blow the whole town to Australia if it wanted to… No matter how many geysers they have.  But nevertheless thats were we lived for a couple of days… in a town, in a volcano… crazy!  Anyway, I have been side tracked… I did also travel out to an active marine volcano called White Island, as while it isn’t a lava spewing volcano it was still pretty crazy! It spews steam, mud and sulfur and smells pretty bad, but it was pretty amazing to walk around, get pretty close to the main crater and live to tell the tale!  Although I did feel like I might die from the sea sickness I experienced on my way to the island.

21. See some black sand – completed: 02/01/15
On the way home from the volcano we stopped at the popular North Island costal town of Ohope for a swim… And the beach had black sand… I don’t know why this fascinates me as much as it does, but it really confuses me. Apparently it is a west coast trait… And I have no idea why the sand is black and I don’t really care… I love it… Although it gets pretty flipping hot! 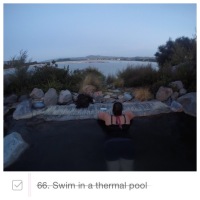 6. Swim in a thermal pool – completed: 02/01/15
The second of January was a big day… And what better way to finish it then to have a spa… A natural spa… In a thermal pool in Rotorua…

. Rent a bike and go on an adventure – completed: 03/01/15
90. Ride a push bike without tears – completed: 03/01/15
Riding mountain bikes through the redwoods in Rotorua was Dave’s only request for the trip… And it almost didn’t happen as we almost couldn’t get bikes… But it did and I survived… I won’t lie, as much as I try to like riding bikes and even sometimes pretend that I do, I just don’t really enjoy it… And I was almost 100% sure this trip would end in tears, literally, that’s why these were both on the list… But I rode my bike through the Redwoods and a there wasn’t even a single tear. In fact, by the end of it I was almost enjoying myself… Almost

35. Go Hiking – completed: 03/01/15
This one wasn’t planned, but it was great. Dave and I took a quick road trip out to see the blue and green lakes in Rotorua because they were listed as ‘things to see’ in one of our travel books, but on the way we passed The Buried Village and because I am a sucker for a tragedy I made Dave stop.  The little museum is basically the remains of the town that was there over 100 years ago that was destroyed when a volcano blew… The volcano also destroyed some natural terrace thermal pools which would have been pretty awesome… Anyway, as we walked around the grounds we found a little optional trail which turned out to be a little hike to a pretty awesome waterfall… Well worth the spontaneous stop and detour from the path.

65. Go on a luge – completed: 03/01/15
Ok… So maybe it wasn’t just the second that was a big day… The first three days of the year crossed 8 things off the list… That’s a pretty big start!  The luge was heaps of fun, it wasn’t quite the lying down, no breaks, concrete death that I had imagined, instead it was more of a glorified go-kart and it was great.  And while I did try to go with out the breaks for a little while, I had to start using them again after I had my cart on one wheel… I didn’t want to smash my face!

2. See two oceans meet – completed: 05/01/15
When we were planning our trip I was told that at the top of New Zealand you can see the Pacific Ocean and Tasman Sea crash into each other because they don’t mix.  Convinced it would be epic, I asked Dave to change our plans so we could go and see it. These were my holiday requests… The Hobbits and the oceans crashing.  In anticipation for the trip I googled it… And I was a little disappointed… in the pictures they just mosey on together… Meeting but almost ignoring each other… Not quite what I had in mind.  But the trip had been changed and we were heading as north as you could go so that I could find out first hand that they meet, high 5 and go on there merry way… You can see the colour difference and it’s still pretty cool… But there was no crashing… 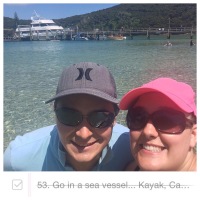 53. Go in a sea vessel… Kayak, Canoe, Paddle boat whatever – completed: 06/01/15
I could have crossed this off on the 2nd when we headed to White Island, but because the boat part of that trip was so yuck I didn’t want to taint the list with it… And I knew were doing this cruise, to a place called ‘Hole in the Rock!’ So this time armed with artificial ‘sea legs’ I enjoyed a boat cruise around the Bay of Islands to the Hole in the Rock and while we were there I also got to cross number 99. See a wild swimming animal as we stopped to watch some Dolphins playing

10. Order fish at a restaurant – completed: 06/01/15
I know this seems kinda lame, but even though I enjoy fish, I always wuss out when I am out. I always panic that I won’t like it, or it will make me sick… That’s why this made it on to the list… And thanks to some salmon I chose at a waterfront restaurant called 35degrees south it’s now off the list.

34. Stay at the Langham – completed: 07/01/15
Just before Dave and I got married we entered a competition to win a trip around the world to all the Langham hotels by having the worlds most romantic proposal… And we almost won… We got in to the top 10, and then didn’t quite get our second video up to scratch because we were too busy enjoying our honeymoon… Anyway, we decided that if we could, if were near a Langham we would stay even for just one night… So thanks Langham Auckland for being our first international stay… Your beds and pillows are just as good as the Melbourne ones!

83. Go to a live sporting event – completed: 08/01/15
This was another unplanned New Zealand adventure… But when your hanging out with family and they offer to take you to the tennis you go… Seriously, who wouldn’t?

29. Take a selfie with the selfie stick at full extension – completed: 10/01/15
I know selfie sticks are annoying and perhaps as the Wanganui paper described ‘the most narcissistic present this Christmas’, but Dave and I became the proud owners of one and used it with pride! This was no ordinary selfie stick either… It extends 4feet and is operated by remote and it helped us capture some our and New Zealand’s finest work!

So that’s the list contributions… There is so much more of our trip to tell, but I think maybe I will save I that for another day, as I will be surprised if anyone actually made it through this far… But the list is well underway thanks to New Zealand… And our families who gifted us some of these adventures and some of the cash we spent on making them happen! Monday you can still happen tomorrow… I know you will anyway… But you can’t kill my holiday joy that easily!

6 thoughts on “New Zealand… The Land of the List!”